Is it cheaper to rent or buy?

Is it cheaper to rent or buy a home?

If you can’t afford to buy, renting is cheaper. Right? Well the latest figures show that might not be the case with average mortgage payments LESS than average rent payments.   But does that mean buying a home costs less than renting?

If you look at the annual cost, it would appear so. Over the last five years, we’ve seen both rental and mortgage payments increase. However, the average cost of rent has grown far quicker. In 2015 it’s eight percent more expensive each month to rent, with an annual difference of £672.

In fact, not so long ago in 2009, renting was significantly cheaper each month than having a mortgage with a 16% difference between the two. 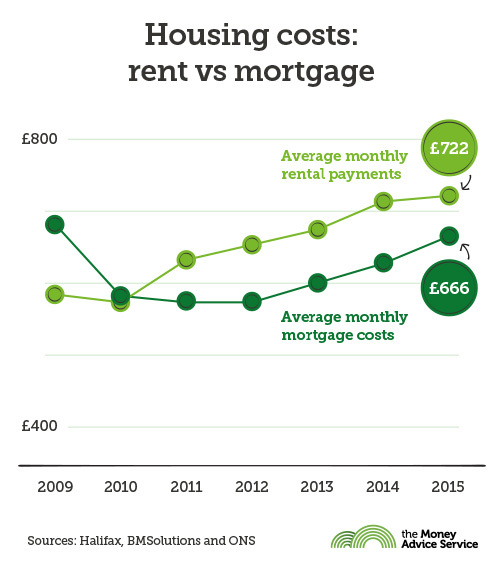 Why is renting more expensive than buying?

So what’s behind this change?

Partly to blame is the high value of the average home, pricing many out of the market. The rise of buy-to-let properties has also had an effect. With landlords snapping up extra homes, there are less available for people to buy.

Both these trends have forced many to rent instead. This in turn means there’s greater demand for rental homes, which leads to a more competitive market, which leads to higher rents.

At the same time, interest rates have been at 0.5% for six and a half years, bringing down the average mortgage repayment, and contributing to the increasing difference.

It’s not just a London bubble either. The cost of renting around the country is higher all over the UK except the South East (and then only by 1%). Some of the most extreme are shown in the chart below. 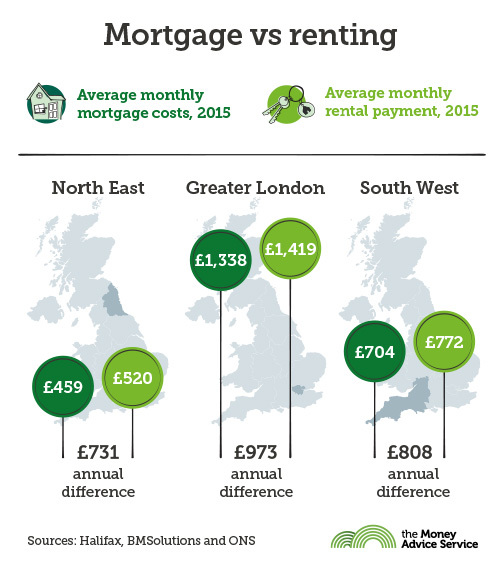 How does the UK compare? Find out the differences across the whole country

Can you afford to buy?

However cheaper monthly mortgage payments aren’t the only costs – and they don’t necessarily mean you’re better off buying a home than renting.

First you’ve got to consider if you’ll need to save for a deposit. The larger your deposit is as a proportion of the property’s value, the less you need to repay. You’ll also be able to apply for lower mortgage rates. However with house prices so high, even a 10% mortgage requires a sizable down payment.

Getting a mortgage is also dependant on passing affordability checks, with your credit history and spending habits under the lender’s microscope. So not only could debts get in the way, but also how much you spend on a night out and holidays.

Once you own a property, you’re also responsible for maintaining it. So if your roof leaked or your boiler broke, there’s no landlord to cover those costs for you.

On top of that are the sizeable upfront costs. From Stamp Duty to solicitor’s fees, the total cost at the start is often bigger than you’d expect.

That’s not to say renters also don’t get hit with hidden costs. From agency and reference fees to cleaning and damage costs when you move out, these can quickly add up if you move every few years.

However, if you can stump up a decent deposit and find a place you want to buy, the money you put into a mortgage will still be yours – albeit tied up in the property - when you make that final payment (minus the interest of course).

Will an interest rate rise make make it better to rent or buy?

When you get a mortgage you’re not just paying back the money you borrow, you’re also paying interest on it.

However, despite various hints that rates could go up late this year or early next, it’s all speculation. The recent developments globally, particularly in China, have prompted analysts to say it could take longer. Plus, when they do rise, it’s also likely the increase will be gradual.

Is renting is the only option?

Despite this, for certain groups buying is increasingly unlikey, with higher rents making it even more difficult to save each month for a deposit.

There is some hope though. Help-to-Buy and other schemes can provide a boost, and the new Help-to-Buy ISA is launching in December.

However, if schemes like these are still a leap too far, then a future as “generation rent” is on the cards – and it's unlikely there is much you can do to battle rising rents.

This article is provided by the Money Advice Service.

Content provided by OnTheMarket.com via Twitter and is for information purposes only. Independent and professional advice should be taken before buying, selling, letting or renting property, or buying financial products.

See www.onthemarket.com/newandexclusive. Agents specify exclusivity and are committed to accuracy under terms of use.